As a well-established, fully capitalised business, with high performing and experienced individuals on the ground, we can proudly say that our people are the cornerstone of our success. Our diverse, multicultural setup offers you deep local and global market insight.

FundRock’s solid foundation is underpinned by decades of banking infrastructure and governance, investment in best of breed risk management systems combined with the use of cutting edge RegTech systems.

We provide you with solid local substance combined with global connectivity, enabling you to focus on your core business.

In a partnership approach, FundRock as an AIFM secures the fund environment and ensures compliance with regulations 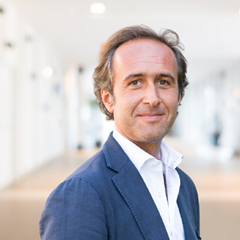 Jean Edouard joined FundRock in 2020 and is based in Paris. He leads our ManCo service in France, driving our expansion into the French private equity real estate sector. He was previously Managing Director and Head of Real Estate at Twenty First, helping to create and develop the asset manager’s real estate fund management business, raising €2 billion in assets by the end of 2019. He has more than 20 years of experience in the financial services industry, and has held various management roles including Director General at OSCA Fund Management and Foncière Volta.

Gaetan joined FundRock in 2020 and is RCCI at FFAM & Group Head of Regulatory Affairs. Based in Paris, Gaetan has over 14 years of experience in the financial services industry with extensive expertise in EU and French asset management regulations. Previously he mainly worked within the French Market Authority (AMF), the European Commission and the World Bank. He started his career in 2006 after his graduation in Financial Engineering and Law from the IUP of Caen. Since then, he’s held various positions and responsibilities. Gaetan has been in charge of Bank, Insurance and Debt issuances programs, contributed to several ESMA task forces on AIFMD, involved in cross boarder distribution of investment funds regulation/directive and the Fintech task force, inspected European Regulation and assessed the overall impact affecting the Global Market Division.

Strictly necessary cookies ensure that our website is able to function properly. We don't have to ask for your consent to store these cookies on your browser.